The double threat posed by the Soviet Union and Nazi Germany gave rise to a pioneering educational project in the thirties: the first economics film. 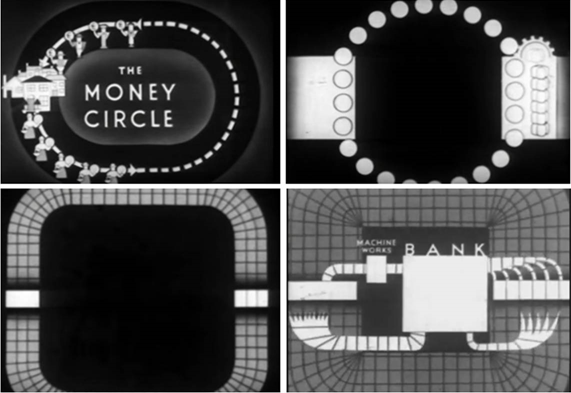 While most economists have heard about Karl Polanyi, the mastermind who linked economics with anthropology in pursuit of  understanding the social insensitivity of the West, they rarely have noticed that his younger brother, Michael, also found unorthodox ways to guide his peers into economic realms. One of these unconventional ways was to develop an economics film. Michael Polanyi’s aim was to convey the message of a specific breed of Keynesian economics, neutral Keynesianism, to the masses. He hoped that, by informing society about this new stream, people would be more resistant to the siren calls of economic planners who carefully disguised the pillage of liberty as the promise of security.

A Martian in Manchester

Polanyi must have felt that the death of liberty was in his wake. He fled from the terror in Hungary (1919) and found a temporary liberal sanctuary in the German scientific milieu. But soon he needed to flee again (1933). This time from the nazis.[1] When he started to see the spread of authoritative patterns in his third home, the United Kingdom, he took action to counter the illiberal threat. For that, he needed to redirect his energies from chemistry to economics. Being the head of a well-equipped laboratory at the University of Manchester gave him exactly what he needed: free time. Stepping away from doing experiments himself, he devoted much of his time to reading and writing about economics. He soon joined a most notable network of liberal intellectuals by attending the Walter Lippmann Colloquium (1938) and becoming a member of the Mont Pelerin Society (1947). But Polanyi was not satisfied with any of the available liberal proposals so he decided to forge a new one which would be appealing to the masses.

Polanyi, the Walt Disney of Economics

He first had the idea of making an economics film to teach economics in 1929. After getting grants from the Rockefeller Foundation and the University of Manchester and teaming up with British Gaumont Instructional, his film project was on a fast track. He developed two versions of his pioneering motion picture. The first premiered as An Outline of the Working of Money (1938), the second as Unemployment and Money: The Principles Involved (1940). The film portrayed the circulation of money in the economy and proposed a specific kind of Keynesianism to counter the recession. Similarly to the Keynesian recipe, the Polanyian proposal urged state intervention into a troubled economy. But, unlike orthodox Keynesianism, it did not accept infrastructural investments and public works as healthy solutions. How else can the state intervene if not by these fiscal means? Well, by monetary means. Polanyi proposed to inject more money into the circulation when needed simply by tax remissions and budget deficits. Not removing the expected amount of money from the circulation, Polanyi advised, would have a similar effect to putting more money into the circulation. He imagined this to be a neutral solution, that is, a way which does not favour any group at the expense of others. For him, no discretionary decisions (e.g., about which infrastructural projects to support by the state) meant no opportunities for corruption. Polanyi envisioned the additional amount of money to be spread uniformly over the given amount without causing spikes of riches and valleys of poverty. His talking and moving picture economics immediately drew serious interest. Journals and newspapers like Nature and Times celebrated Polanyi’s novelty and one of the first reports called it an ‘art of a new Walt Disney.’ (unknown 1938) What happened then? Why did this story become a long-forgotten chapter in the history of economics?

The Silence of the Tutors

The film left the projection room and entered British classrooms all over the country. In cooperation with the Workers’ Educational Association (hereafter W.E.A.), Polanyi had his film tested by at least nine tutors in various schools between 1941 and 1942. Experience from these test screenings shows that neither the schools nor the tutors were prepared to use educational films. One tutor noted that it took forty-five minutes for the technician to get a properly focused picture on the screen. Another indicated that there was no screen at all in his school so they needed to improvise one. However, the most crucial critiques were not related to technical applicability but to pedagogical applicability. One of the tutors complained that the audio track of the film forced her to be silent during her own class. She felt deprived of the freedom to teach what and how she pleased. Some tutors complained that the narrative of the film made traditional blackboard work unnecessary. Others complained that the film made it necessary to do even more blackboard work than before because tutors needed to explain what was happening on the screen. Most tutors simply did not know what to do with the film: they could not see how to make it fit to the given syllabus and to their usual verbal narrative. As Polanyi’s film left the projection room and entered the classroom its perception changed. From a promising novelty it became an impractical curiosity.

Polanyi recognized the undesirable reception of his film and started to work on a textbook, Full Employment and Free Trade (1945), which told a similar story in a very similar way (he even used the same artistic style for the illustrations). Why was he so presistent about his project? For him, it was not only an innovative scholarly endeavour but an important social mission. He wanted to educate the public for a special reason: to make people more resistant to the threat of autoritarianism. This threat was coming from various places. It was coming from the ideologies of the Soviet Union and Nazi Germany that had already reached British shores. And it was coming from certain proposals for economic crisis management (e.g., the Beveridge plan) that aimed to ease economic hardships at the expense of public liberties. Polanyi was unwilling to compromise and worked vigorosly to kickstart his liberal rescue mission. Not surprisingly, a reviewer of his book called Polanyi the ‘buoyant economist’ (unknown5 1946) of liberal capitalism in contrast to Hayek, who was described as the rather passive ‘warning prophet’ (ibid) of the same ideology. One might wonder, what could have these two accomplished together in the 1940s by fusing Polanyi’s energy with Hayek’s scholarly rigor?

Polanyi, Michael. 1938. An Outline of the Working of Money, G.B. Instructional Ltd.

Dr. Bíró is the vice head of the Department of Philosophy and History of Science at the Budapest University of Technology and Economics and a research fellow at the Morals and Science Lendület Research Group at the Hungarian Academy of Sciences. His interests are history of economic thought, science and technology studies and intellectual history. He recently published a research monograph titled The Economic Thought of Michael Polanyi (Routledge, 2019).

[1] The Martians were a group of prominent Hungarian scientists fleeing from Hungary in a double exile (Frank 2009) first to Austria or Germany, and then, to the UK or the United States. Polanyi kept in touch with several other Martians including John von Neumann, Leó Szilárd and Eugene Wigner. He organized an economics discussion group in which several of his fellow Martians participated during the Berlin years.