women are but the toys which amuse our lighter hours.
Sir Walter Scott.


I have a feeling, a feeling deep inside, a feeling I can’t hide. This feeling tells me that the true main character in Walter Scott´s Ivanhoe is Rebecca, the Jewish physician who cures Wilfred of Ivanhoe´s wounds, is then kidnapped by a Templar knight and later saved from the stake by the grateful Wilfred. Furthermore, I believe that the theme of the novel (at least one of them) is the unrecognised role of women in medieval society. Surprisingly, like no other male writer of his time and very few of ours, Sir Walter Scott appears to be a feminist.
Here I want to apologize to all scholars of English literature, because I am writing with no serious investigative knowledge on the subject. I read the novel thoroughly and was deeply surprised by the writer´s subtle intelligence and clarity of judgement. I will try, nevertheless, to support my feeling deep inside by bringing forward how the narrator depicts women and how he depicts the way his male characters relate to women. To everybody´s comfort I will often refer to the narrator with the author´s name.

I
Rebecca is the daughter of Isaac of York, a Jewish usurer. Although her father presents some of the typical traits of Jewish characters in European literature, Rebecca on the contrary shows none of them. She is calm and self-assured, but sensible and generous. And when Sir Walter reveals her ability as a physician I immediately noticed the absence of a remark about the relation between the healer´s genre and her capacity. Not once does he say, “she was clever or skilled despite being a woman” or “she had a masculine mind”, neither he censors or punishes her for her knowledge. Furthermore: he gives Rebecca a female master.
I cannot but compare this to the way Balzac depicts women. The French writer often refers to women in general as the “weak sex”. This weakness means usually that they require the support and protection of men, and that they fall easily to the temptation of earthly pleasures, and drag men with them. The classic pattern. The uncommonly cultivated women in Balzac´s novels are silenced. If they are wise they hide willingly their disturbing knowledge. In Albert Savarus Balzac explicitly praises this attitude and wonders if it is better to educate women and so risk to produce demons, or not to educate them and leave them victims of their passions.

II
Regarding the male characters, Sir Walter shows them as spoiled children when it comes to women. Whenever a woman does not do as they wish, they scowl and call them ungrateful. How is it possible that you don´t like me?, they ask in much subtler ways. How can you be so cold and defensive after I kidnapped you and repeatedly expressed my wish to rape you? What is better is that there is no need for the narrator to pass judgement about his characters actions. Their doings and words are enough.
Towards the last part of the novel, for example, Brian de Bois-Guilbert, a Knight of the Temple, falls for Rebecca, kidnaps her and hides her in the Templar convent. At the same time, the Templar Grandmaster arrives to bring the Order back to order, so to say. When Rebecca´s father comes to offer a ransom for his daughter, the Grandmaster discovers that the licentious Bois-Guilbert keeps hidden a Jewish woman, who is the known disciple of a burnt sorceress. The preceptor of the convent, who is a friend of the guilty knight, finds then the way to save his friend and himself by blaming the woman. She has bewitched the valiant knight, he says. He is but a victim and he, the preceptor, has allowed her presence in the convent only to control the situation and prevent the poor knight from falling in further sin. The fanatic Grandmaster obviously loves the story and calls Rebecca to judgement.

III
But what makes Sir Walter in Ivanhoe a complete feminist, with the negative load all idealism implies, is that Rebecca has no flaw. She is the only character in the novel who never shows a moment of weakness. For example, when she is facing the stake and the Templar knight offers her to escape together, she rejects him with not one moment of doubt. By denying Rebecca the right to fail a little to herself, at least to doubt about what she holds sacred, Sir Walter makes an angel of her and not a woman, a human being. By doing so he places her in an unreachable position. And so it seems to us, the women who read the novel, that to be an honourable woman is never to fail. Some women understood female liberation this way and plunged into life trying to comply with all of what society demanded of them. They became successful professionals, but also beautiful desirable women, good mothers, of course, and attentive housewives. They are Rebecca. It is time, I think, to fail a little bit, step down of the pedestal, and come out of hell.

Excerpt from Philosophy of Cruelty


In the attempt to disseminate and spur philosophical reflection beyond sole academic circles, scholarly conferences and professional periodicals, Northwest Passage Books has offered me once more the opportunity to collect, revise and polish several past works of mine, which were written and published between 2000 and 2015. After a first volume focussing upon the philosophical theme par excellence, i.e. mortality, I was invited to gather and reshape articles, discussion pieces and book chapters, all of which deal with a less commonplace philosophical theme: cruelty. As the issue of mortality had led me into the history of philosophy, the lethal consequences of deficient conceptions of economics and the insights of a select group of great thinkers, so does the theme of cruelty open an equally rich spectrum of topics for keen philosophical inquiry. Fittingly, I explore here: (1) the most frequent conceptions of cruelty in Western culture; (2) some controversies surrounding its understanding in politics and in ethics; and (3) the contemporary school of political thought that is based upon its explicit and forceful rejection in the public sphere, championed by Judith Shklar and Richard Rorty, and known as liberalism of fear. I write “explore” because this is what the book consists in, chiefly: visiting strange new places, namely diverse thoughts and systems of thought, without knowing in advance where the wandering mind may end up. This book does not preach, though it does not shy away from judging, at times. It does not build a neat structure, though it organises a great variety of building blocks. Rather, this book sails over the vast sea of the Western canon and, while drawing a map of the same, it identifies the most perilous areas and the ones with fish aplenty.
Mortality terrifies and nevertheless intrigues many people for its inescapable yet definitive, indeed life-defining, character. In an analogous way, cruelty both repels for its intrinsic ugliness and yet appeals to a fond noir à contenter [a dark depth to please] that most persons experience not infrequently within their own psyche, as exemplified by the broad allure of crime novels, horror movies and the eager morbid curiosity elicited by car crashes along the busiest motorways. Possibly because of the resulting ambiguity at the heart of cruelty, which is both revolting and fascinating, philosophical works about cruelty are both sparse and ample. On the one hand, when one reviews the philosophical and theoretical literature, she discovers that there exist very few studies devoted entirely and explicitly to it. Long monographs and large tomes on cruelty are particularly rare, unlike voluminous inquiries into, say, knowledge, justice, or government. On the other hand, remarks and considerations about cruelty abound in studies dealing with cognate terms (e.g. violence, oppression, vice) and related phenomena that affect social relations nearly everywhere in the world and at a considerable variety of levels (e.g. education, crime, statehood, law enforcement, sexuality, agribusiness, healthcare). The material and the ideas presented in this book should be of interest to the reading public at large, for we all are bound to meet cruelty in our lives at some point. We may not like the idea and even less the experience, but there is often nothing that we can do about it, as some of the following chapters make clear. Also, the same material and ideas should be of interest to those academics that have not come across the past studies of mine hereby collected and re-edited, since they have obvious and obviously significant implications for sociology, criminology, psychology and legal studies. Northwest Passage Books and its chief consultant, Dr. Brendan Myers, dare cross the border separating academic and non-academic publishing, in order to let many disciplines and mental attitudes criss-cross and cross-fertilise. In the same spirit, I hope to be able to reach a most diverse readership and stimulate reflection in all departments—academic ones, yes, but above all, of human life. 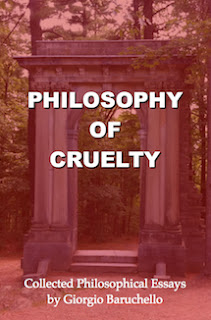 Paperback, $19.95 USD.
Purchase from Amazon
Purchase direct from the publisher

“Baruchello’s Philosophy of Cruelty, the second collection of his essays, turns a difficult and emotionally charged topic into a surprisingly informative and enlightening read. Covering the history of Western philosophy’s treatment of cruelty as a topic, yet relating every point to present-day occasions of violence and injustice, this book is a touchstone for any discussion of cruelty as a philosophical theme. It pulls no punches, yet it leaves you standing taller.”
--Brendan Myers,
author of The Other Side of Virtue and Reclaiming Civilization.

PART II – Cruelty in the History of Thought
Chapter 4: No Pain, No Gain. The Understanding of Cruelty in Western Philosophy
Chapter 5: The Politics of Cruelty: On Sade and Nietzsche
Chapter 6: Ordinary Hell. Reflections on Penal Justice between Dante and Nils Christie

PART III – LIBERA NOS A CRUDELITATE
Chapter 7: Disciplinary Divisions and Petty Academics. In Memory of Richard Rorty (1931–2007)
Chapter 8: The Ironic and Painful Cornering of Liberalism of Fear
Chapter 9: Enemies of Interculturalism. The Economic Crisis in Light of Xenophobia, Liberal Cruelties and Human Rights