The Power of Fiction

I
I am bewitched by stories. But aren’t we all? I should certainly like to begin this piece with a universal statement like: “Since its birth, humanity has been fascinated by stories”. But I have neither the courage nor the ability to ignore with peace of mind all those tiny differences of graduation that separate us, the human individuals, sometimes stretching such distances between us that we can no longer understand each other. For instance, I cannot share the passion some people have for cars, but I can well recognize in their passion some of the obsessive traces I myself show when it comes to stories. I do dare say that stories have been with us for a long time. They have taken different shapes. And, like food, cars, or Sauron’s ring, they have the power to bind us.
I can follow this fascination with stories to the farthest corners of my memory. And I love them in all their modus. I can equally fall for a book, for a film or for a series. The better the story is told, the deeper my involvement with it. But I have noticed that this is not enough. I don’t fall easily for a newspaper story, no matter how well written they are. I like to watch documentary films, but to me they are just interesting. I don’t fall in love with them. I have come to realize this fact for a short time. Maybe because I started to seriously ask myself where does the power of stories lie. How does their spell work?

II
A couple of years ago, Amazon released a series based on a book, both called The Man in the High Castle. The book was written by Philip K. Dick and published in 1962. It depicts a world where the Nazis and the Japanese have won the Second World War. The net that connects the different characters of the story is woven through a fictional novel that depicts a world where the Allies actually won the war, written by a man who supposedly guards himself in a well-protected fortress.
After watching the first season of the series I was left with the uncomfortable feeling that the story had lost its power. The series is well done, it achieves its purpose of hooking you up and making you want to see more, to know what happens next. It develops the characters and events in a different way than the book does. But that is not what bothered me. On the contrary, I believe everyone has the right to variate a story, to tell it again in another way, this is how stories survive. But I felt that this version of the story had washed away the rusty, pointy, unclear and dangerous elements of the book and achieve a more digestible version of it. Nothing new under the sun, one may say, the typical Hollywood problem.

III
One of my favourite answers to the problem of art in general and literature in particular is the idea of ‘defamiliarisation’ of perception which Russian Formalists brought forward at the beginning of the 20th century. Either by using language in unexpected ways, or by arranging the narrative elements in an unexpected order, or by including the absurd as a matter of fact, a literary work would achieve, in the first place, to disturb the usual mechanism of our perception and in the second place to turn us to those mechanisms and question them, in other words, to discuss what we feel as natural. Across the past century this idea has, in one way or another, drawn the blurring line between art and entertainment. But, then again, some products of the entertainment industry have achieved a powerful and uneasy combination between these two “poles” (which perhaps are no longer such). The differentiation between what is a work of art and what is entertainment is losing its effectiveness. Besides, this industry is also changing, taking other shapes and producing works that deserve to be thought of. Not only because of the number of people who consume them and how they change the world of those people, but also because of their own qualities as cultural products.

IV
I am mainly thinking of this new series-wave. The fascination some of us now experience with series is how I imagine the fascination people in the nineteenth century experienced with the novels published and delivered in chapters by the newspapers. But the spell this series cast is, at least on me, only sometimes effective. Many of them, like The Man in the High Castle, have the charm of a teenage party supervised by parents and teachers. It is probably a silly comparison, but this is how they seem to me: controlled, contained and wanting to make sure that the message is sent, and does not give place to misunderstanding. And then, while reading some articles of Carl Gustav Jung, I came upon this statement:
Concrete values cannot take the place of the symbol; only new and more efficient symbols can be substituted for those that are more antiquated and outworn, such as have lost their efficacy through the progress of intellectual analysis and understanding. (Jung, C. G, “Author’s Preface to the First Edition” of Collected Papers on Analytical Psychology)
A preliminary and very general answer to the question above, then, could be: stories work as symbols, when their spell works well. This symbols, says Jung later, are produced by the individual unconscious and represent something “whose intellectual meaning cannot yet be grasped entirely”. The encounter with this quote helped me think of stories under a different light, no longer constraint by the mainly rational approach of formalism, but neither falling in a purely emotional, romantic point of view. The concept of symbol, its ability to linger in our souls and work in many directions, appeals to me as an unexplored territory.

A Festschrift for Thomas O. Buford 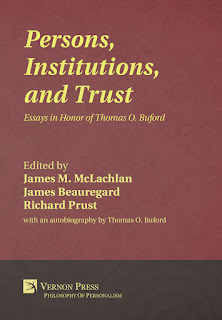 The papers presented in this volume honor Thomas O. Buford. Buford is Professor Emeritus in Philosophy at Furman University where he taught for more than forty years. Several of the papers in this volume are from former students. But Professor Buford is also a pre-eminent voice of fourth generation Personalism, and Boston Personalism in particular. Personalism is a school of philosophical and theological thought which holds that the ideas of “person” and “personality” are indispensable to an adequate understanding of all metaphysical and epistemological problems, as well as are keys to an adequate theory of ethical and political human interaction. Most personalists assert that personality is an irreducible fact found in all existence, as well as in all interpretation of the meaning of existence and the truth about experience. Anything that seems to exist impersonally, such as inanimate matter, nevertheless can exist and have meaning only as related to some personal being. The Boston Personalist tradition was inaugurated by Borden Parker Bowne and continued by Edgar S. Brightman, Peter Bertocci, John Lavely, Carol Robb, and Martin Luther King, Jr.

The Personalist Response to the Problem of Evil in Brightman, Bertocci, and Buford
James McLachlan, Western Carolina University
Response by Thomas O. Buford